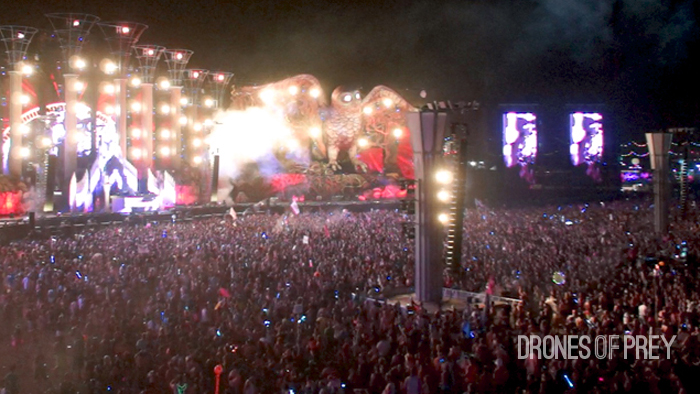 Aerial cinematography in Las Vegas was provided by Drones Of Prey for the Electric Daisy Carnival. Held at Vegas Motor Speeday, EDC dazzled more than 400,000 people with 8 stages of entertainment utilizing cutting edge video and lighting gear. Each stage featured a different artist and offered a visual experience like no other show on earth. EDC featured over 200 artists during this 3 day event culminating with a performance by DJ Calvin Harris who’s current hit “Summer” is No. 10 on Billboard’s Hot 100. Capturing aerial video in this type of environment is extremely difficult and it takes a lot of planning to safely navigate obstacles like large crowds of people, filming at night and an extremely noisy environment where communication is hindered. Drones Of Prey worked closely with the producers of EDC to capture some amazing aerial cinematography in Las Vegas while keeping participants safe and entertained. During this shoot Drones Of Prey flew a 6 rotor all electric hexacopter outfitted with a precision camera gimbal filming in 1080p at 60 frames per second.